DNA topological problems could cause lymphoma

DNA topological problems – such as tangling and over-winding of the DNA molecule – could cause endogenous DNA breaks that eventually lead to lymphoma, according to a new Spanish study.

The study was led by researchers from the Spanish National Cancer Research Centre (CNIO), Madrid, and the Andalusian Molecular Biology and Regenerative Medicine Centre (Cabimer), Seville. The team looked at what happens during lymphocyte maturation in a process called V(D)J recombination. This is when a number of genomic regions must find each other and rearrange to generate the DNA sequence variability required for the immune response

Writing in Nature Communications, they say movements and changes in the 3D genome structure create knots and tangles in DNA that, during their resolution, are a source of chromosomal breakage.

Study leader Felipe Cortés‑Ledesma, head of the topology and DNA breaks group at CNIO, said: “In conditions in which the response to these breaks is impaired, chromosomal translocations that may be associated with lymphoma development can occur.

“Actually, this is true upon mutations in the ATM gene, which are very common in haematological malignancies and the cause of the lymphoma-prone syndrome ataxia telangiectasia.”

The researchers describe how the ATM kinase is a master regulator of the DNA damage response to double-strand breaks. It is a well-established tumour suppressor, whose loss is the cause of the neurodegenerative symptoms and an increased risk of cancer in A-T. Of note, A-T patients are particularly predisposed to develop lymphoid cancers.

The enzyme DNA topoisomerase II helps to resolve topological problems in DNA. In their study, the team showed that blocking this process by genetically deleting TDP2, a key partner of topoisomerase II, led to a significant increase in thymic tumours in mice carrying a mutation in Atm.

“Our results show a strong causal relationship between topological problems and cancer development, confirming these lesions as a major driver of ATM-deficient lymphoid malignancies, and potentially other conditions and cancer types,” they write.

The researchers hope their findings will open up new ways of understanding the causes of cancer.

Cortés‑Ledesma said this could include the possibility of “getting a deeper understanding of the molecular mechanisms involved in the appearance and repair of this type of DNA break”. 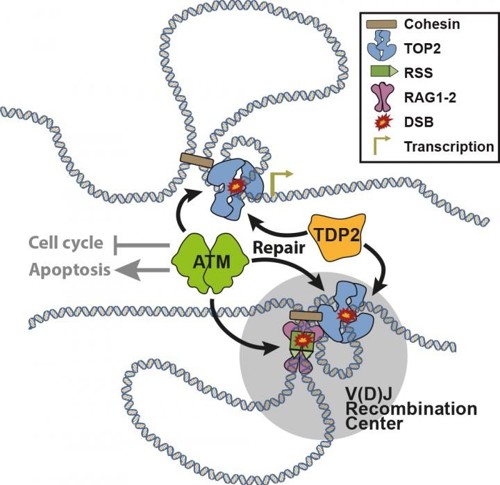 Disclaimer: The news stories shared on this site are used as a way to inform our members and followers of updates and relevant information happening in Haematology. The BSH does not endorse the content of news items from external sources, and is not in a position to verify the findings, accuracy or the source of any studies mentioned. Any medical or drugs information is provided as an information resource only, and is not to be relied on for any diagnostic or treatment purposes.