In 2018 haematologist Catriona Haggart took charge of a mystery cabinet in Edinburgh Royal Infirmary’s toxicology lab. It was locked and no one knew what was inside. 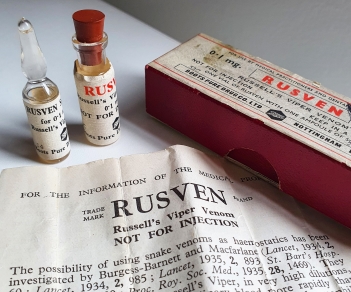 Catriona opened it up to find six drawers filled with hundreds of decades-old chemicals. With a UKAS inspection looming, Catriona got to work. Amongst the pigeon worming tablets and dog anaesthetics, she discovered a cardboard box labelled ‘RUSVEN, Russell’s viper venom… investigated by Barnett and Macfarlane’. Bought from Boots & Co. in 1949, it still contained the buffer and powder ready to be mixed.

The box’s leaflet describes Rusven as a topical treatment to slow bleeding in patients with haemophilia. It claimed to reduce blood coagulation time and the instructions for use in dental extractions involved soaking a piece of raw beef in Rusven to create a plug which would ‘mould itself to fit the bleeding cavity’.

The cardboard box rescued by Catriona is a pocket-sized reminder of a 30-year investigation to understand and treat haemophilia and it was not until the mid-20th century that the life expectancy of a person with severe haemophilia rose above 20 years old in the UK.

The investigator ‘Macfarlane’ is Dr Robert Gwyn Macfarlane CBE, FRCP, FRS (1907-1987) ‘one of the most brilliant medical scientists of his day and the most distinguished haematologist in the UK’. Macfarlane’s work helped to establish the scientific basis of modern blood coagulation but his pioneering career had begun in the 1930s with a baffling discovery: following a series of bold experiments, Macfarlane realised that venom from the Russell’s vipers in London Zoo appeared to speed up blood clotting time in haemophilia patients but had no idea why.

A gifted writer, Macfarlane described his early research journey in an entertaining account published on his retirement in 1967. He shared some abject failures in order to demonstrate ‘how the growth of knowledge is hampered by prejudice and the failure to recognise one’s own ignorance… I suspect that if someone talks to ‘Bios’ [biochemists] about Russell’s viper venom in 1995 [they] will be surprised that we could have been so stupid in 1965’.

A former trainee of Macfarlane’s recalled a sign in his office: ‘Science is difficult, but people are impossible.’

Macfarlane first saw the consequences of haemophilia as a young medical student at St Bartholomew’s Hospital from 1926. His patient was ‘a young man, with a small cut on his chin, which bled persistently… We tried dressings and bandages and strapping, the blood just went on... The cut was sewn up, with the result that he got an enormous haematoma, and the stitches burst… We tried adrenaline, ice packs, hot packs, pressure dressings and things got steadily worse. Meanwhile he lost so much blood that he had to be transfused... He survived, but only just’.

Later, as an assistant in Barts Hospital Pathology lab, Macfarlane started testing a current theory; women pass on haemophilia to their children, but only men display symptoms ‘so if you feminise a male by means of female hormones, he will stop having haemophilia. The fallacies in the basic argument were apparent to others, but not to me… it had been claimed that ovarian extracts or ovarian grafting had had dramatic results… I became deeply involved with virgin mice and pregnant mares, though the details are mercifully hazy’.

Undaunted, Macfarlane followed another lead; the recent discovery of vitamin P which was ‘supposed to have dramatic anti-haemorrhagic effects… It could be extracted from lemon juice… [and] a kind manufacturer gave us a barrel [full]… I borrowed a portable bath from a ward and filled it... The instructions began 'add barium acetate to precipitate citric acid, allow to settle and decant'. We added the barium acetate but… the whole contents, about 40 gallons, went solid, and we were left with a bath full of what seemed to be wet concrete. We spent days squeezing this stuff through cheese cloth to extract a few drops of vitamin P…. Before actually giving it to a patient, I injected a few milligrams into a mouse. Almost before I could remove the needle the mouse sprang into the air and fell back dead’.

Next ‘Professor [Hamilton] Hartridge, the physiologist, made a suggestion… that certain snake venoms clotted blood and might be used locally if they also acted on haemophilic blood. No one seemed to have done this, so I went to [London] zoo and found the Curator of Reptiles, Dr. Barnett, very willing to collaborate’. 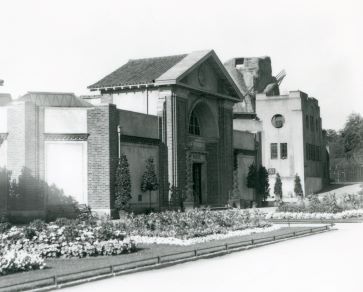 The Reptile House at ZSL
© ZSL

Dr Burgess Barnett (1888-1944) was the perfect research partner for Macfarlane. A former house-physician at Barts, Barnett had spent a decade investigating snakes whilst living in Peru before taking over the Reptile House at London Zoo in a blaze of publicity in 1932; the Evening Telegraph reports Barnett flying into England ‘with a three-foot crocodile… a monkey, a gaudily coloured toucan, a few foxes and several very poisonous snakes’.

Macfarlane was a man of many phobias. He ‘hated flying or staying at overheated and over-carpeted international hotels. He dreaded speaking in public, and he was mortified by the fear that he would forget the name of a colleague’. Macfarlane was also scared of snakes and suggested Barnett extract the venom and ‘I would do the rest, but there was no escape, and I often had to hold snakes while they were made to bite a container and eject their venom… I developed a real aversion to these animals and often had nightmares about them’. Macfarlane’s wife Hilary recalled that he would also alarm her mother by ‘leaving petri dishes full of venom around the house’. 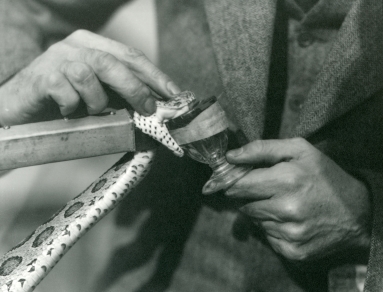 In 1934 Barnett and Macfarlane collected venom from twenty different species and tested them on haemophilic blood. Russell's viper venom was the clear winner and the pair wrote up their findings in the Lancet that year.

‘At a dilution of I:IO,OOO, it clotted haemophilic blood in 17 seconds… We were rather excited by these results… We used it as a local application in one or two cases of superficial bleeding and it seemed to work. Then we persuaded a patient to have a badly needed tooth extraction… the socket was plugged with venom and bled very little. Other cases followed with good results… Burroughs Wellcome decided to market the venom commercially under the name of Stypven, and I got a job as a junior demonstrator of pathology at Bart’s at the then princely salary of £I5O per year. But I still had no idea how Russell’s viper venom clotted haemophilic blood, or any blood, for that matter’.

Barnett left London Zoo in 1937 for the Yangon Zoological Gardens in Myanmar and was later honoured for his part in a dramatic British escape by elephant across the Chaukan mountain pass following the 1942 Japanese invasion. Macfarlane went to work at Hammersmith Hospital with Dame Janet Vaughan and later to the Radcliffe Infirmary, Oxford. It was not until the 1950s that Macfarlane’s crucial revelation on blood clotting came with his development of a ‘cascade hypothesis’ as it became clearer that many different factors played a role in the sequence of reactions that produce clotting. Macfarlane’s collaborative research with Dr Rosemary Biggs to identify and quantify the clotting factors in blood meant that by 1953 it was possible to perform not only emergency operations ‘with a reasonable degree of safety but also formal orthopaedic and other major operations.’