As Curator of Experiments for the new Royal Society in London, Hooke had improved the design of the compound microscope, using three lenses and a stage light to illuminate and enlarge specimens including plants, feathers, fossils and insects.

Hooke wrote: ‘I took a good clear piece of cork, and with a pen-knife sharpen'd as keen as a razor, I cut a piece of it off… placing it on a black object plate… and casting the light on it… I could exceeding plainly perceive it to be all perforated and porous, much like a Honey-comb…These pores, or cells… which were indeed the first microscopical pores I ever saw, and perhaps, that were ever seen, for I had not met with any writer or person, that had made any mention of them before this.’

Hooke was observing cork’s tissue structure and borrowed the word ‘cell’ not only from honeycomb but also the term for a single monk’s room in a monastery – ‘cellara’ in Latin. Hooke wrote up his observations in his masterpiece Micrographia, published in 1665.

After Hooke’s relevations, the study of cell biology didn’t progress further until technological improvements in the 1800s, but Micrographia was a major leap forward. It has been described as ‘the big bang of microscopic studies.’ Back in 1665, Samuel Pepys bought a copy and wrote in his diary:

‘Before I went to bed, I sat in my chamber, reading of Mr Hooke’s Microscopical Observations, the most ingenious book that ever I read in my life.'

Find out more about Robert Hooke and Micrographia in the British Library collections. 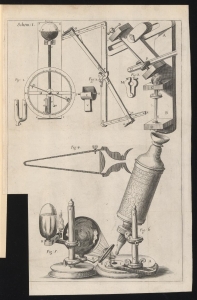 Engraving of a microscope in Micrographia, 1665, by R. Hooke
Credit: Wellcome Collection. Attribution 4.0 International (CC BY 4.0)