Volunteers play a crucial role in helping to deliver the Society's charitable objectives. We have a wide range of opportunities for those who wish to get involved in BSH's activities.

BSH committee members and Trustees talk about the benefits of volunteering on one of our committees.

The benefits of volunteering include

Please be aware that Committee vacancies are only open to BSH members.
Vacancies are also advertised in the monthly member bulletin; members can elect to receive this on your MyBSH.

The BSH Obstetric SIG committee currently has a vice chair vacancy, which is open only to BSH members. Interested candidates should apply below via the link before 5pm Monday, 22nd March, 2021.

Obstetric Haematology is an area which does not have the luxury of large numbers of randomised controlled trials and good quality prospective studies, so expert opinion and shared experience is invaluable. To enhance communication and education, and to raise the profile of this emerging sub-specialty, Dr Sue Pavord and Professor Beverley Hunt established the Obstetric Haematology Group in 2001. This group provides a supportive network to help clinicians in this high stakes area.

The Vice Chair term will be 2 years, after which the Vice-Chair will become the Chair for a further 2 years.

Apply to join the Obstetric SIG

The Communications Committee is looking to recruit three new members. We would be particularly keen to receive applications from Physician Associates, Medical Students, Consultants and Biomedical and Clinical Scientists.

The Committee meets at least twice a year and additionally as may be necessary. Members may attend via teleconference as the need arises.

No special skills or knowledge are required for this role, however an interest in raising awareness of haematology as a specialty, and promoting the work of BSH are required as these are some of the priorities for the Committee. We are keen to represent the MDT and welcome applications from members in any role and at all stages of their careers. Please note you do not need to have publications for this role. Please submit your application using the online form below by 24 March 2021.

If you have any queries about this role please contact saskia@b-s-h.org.uk

Apply to join the Communications Committee

The Royal College of Pathologists are looking for some images to help decorate their new building. Images representing haematology and also transfusion medicine/science would be gratefully received.

They are looking for very high quality images that are at least 300 dpi at 2.4 meters actual height. This is because if the images are lower quality than that they will pixelate when blown up to that large scale. Ideally the images should be abstract as this is an art installation rather than a pathology one, something colourful would be great.

The Royal College of Pathologists

There is a vacancy for a BSH representative for the Association of Clinical Scientists (ACS).

The BSH representative is nominated as an ACS Director/Trustee and is considered the ‘lead’ for the haematology modality within the ACS.

If unable to participate in any of these meeting the Director/Trustee may nominate a deputy from their professional body to participate on their behalf. During Board meetings discussions may result in the need for working groups to be established for ad hoc tasks (such as a documentation reviews etc) and as a Director/Trustee the nominee may volunteer to help contribute towards these. At the AGM any Director/Trustee may put themselves forward to be considered for one of the three ACS Executive roles of Chair, Secretary or Treasurer.

When ACS notifies candidates who have been unsuccessful (either at portfolio stage or at interview in a single or multiple competence areas), the relevant ACS Directors/Trustees are sent the assessors’ comments and a copy of the letter the candidate has received. In that notification letter the names of the Directors/Trustees are included, to contact should the candidate wish to seek further feedback/advice towards a resubmission. If ACS receives the request for feedback this is forwarded to the relevant ACS Director/Trustee to respond. In these situations that Director/Trustee may contact the assessors should they feel more information is required to help with their response but we do not recommend direct contact between candidate/supervisor and assessors, the Director/Trustee would normally act as the conduit for this.

Occasionally the ACS receives an appeal or complaint and the procedure is followed (see Appeals section of the ACS website).

Complaints are usually investigated by the relevant ACS Director/Trustee for the modality.

An Appeal panel must contain an assessor from the modality and any actions that might result from an appeal hearing (e.g. to liaise with the assessors in the modality) would probably be performed by the relevant ACS Director/Trustee.

Clinical Scientists who are interested in this role can apply using this form.

The Royal College of Physicians (RCP) invites its fellows to apply for the post of registrar.

More information can be found here

The Academic Section of Vascular Surgery at Imperial College London are conducting a survey evaluating the impact of the Acute Venous Thrombosis: Thrombus Removal with Adjunctive Catheter-Directed Thrombolysis (ATTRACT) Trial on clinical practice. They would be grateful if you could spare 3 to 5 minutes to share your experience.

Please direct any questions or comments regarding the questionnaire to Aleksandra Staniszewska (a.staniszewska@imperial.ac.uk).

The NCRI MDS subgroup and the IMPACT Stem Cell Transplant Platform are planning a clinical trial to investigate the value of allogeneic stem cell transplantation for patients with high risk features, classified as ‘lower risk’ MDS. Many of these patients will be cared for in centres that do not perform on site allogeneic stem cell transplantation. They would be grateful if you could spare 3 minutes for a survey to understand physicians' interest in this study, including potential benefits and barriers to recruitment.

Link to the survey: https://www.surveymonkey.co.uk/r/6MJLGTY

Please direct any questions or comments regarding the questionnaire to Anjum Khan (anjum.khan@nhs.net)

If you are caring for an individual who is being or has been treated for a hematologic condition and has tested positive for COVID-19, we encourage you to submit data to the Registry. We are also asking clinicians to enter data for patients with no known history of a hematologic condition who have experienced a post-COVID-19 hematologic complication. A sample data collection case form is available for your review prior to data submission. Online data entry takes approximately 5-10 minutes to complete (please note this is dependent on the complexity of the case).

More information can be found here.

A national UK ITP audit has been established to inform best practice in the management of new/relapsed ITP patients during the COVID-19 pandemic. (endorsed by the UK ITP forum, HaemStar and the BSH).

The NCRI MDS subgroup, UK MDS Forum and MDS UK patient support group have created a survey for MDS and AML patients and caregivers to complete regarding their management during the COVID-19 pandemic. The aim of this is to understand more about patients’ perspectives of the changes to their care that took place since the pandemic and also to gain some insight into their own experiences of COVID-19 if applicable. They hope to use the data to better inform them about any beneficial changes to practice that they can take forward to improve the care of MDS and AML patients and also to understand what barriers and difficulties patients came across during this period. Please pass this link on to your patients and their caregivers so that they can have their say.

Dear Member of the Research Community,

Wiley is studying the publishing/academic research communication market and would like your input. This feedback will help us determine the future direction of our company. Please take 20 minutes to complete the survey. Your responses are confidential and will be used for research purposes only.

For every completed survey, Wiley will make a $5 donation to one of four organizations, for a maximum donation of $5,000. You will be able to select which organization receives the donation. Please complete the survey by December 09 to ensure that your views are included.

Or copy and paste the URL below into your internet browser:
https://wiley.qualtrics.com/jfe/form/SV_1ZdbDv8OLJiyL8p?Q_DL=foOGaHagdDM0OMF_1ZdbDv8OLJiyL8p_CGC_3gBOR09bwGzqw7z&Q_CHL=email

If you have any questions about or issues with your survey experience, please contact our researcher at Joseph.Stephan@BroadviewAnalytics.com.

Thank you for your time and feedback,

Blood Cancer UK has funded a study to better understand the emotional and psychological support provided to people who have been diagnosed with blood cancer across England. The research is being carried out by Oxford Brookes University and Oxford University researchers, in collaboration with colleagues at Oxford University Hospitals NHS Foundation Trusts. The survey is focused on support within adult blood cancer services and excludes children, teenagers and young adults as these groups already have nationally commissioned psychological support services.  We want to find out about your current practice, experiences and views. The findings will be used to influence policy and practice in the future, and will help us to improve the level of emotional and psychological support for people with blood cancer.

Please share the details of this research project with relevant colleagues working in England and adult blood cancer services only.

HaemSTAR is a national network of haematology registrars aiming to promote and create research in non-malignant haematology. One of the areas we promote is audit. There is often difficulty in recruiting patients to audits for non-malignant disease, either due to reduced investment into projects relative to malignant haematology audits, or because of the rarity of conditions such as TTP. The aim of HaemSTAR is to use a central committee to either create non-malignant audits, or to promote audits started in trusts around the country to enhance uptake. The committee then disseminate information about these studies to regional leads in each training region. These regional leads then disseminate that information to their registrar colleagues. This allows potentially for every haematology registrar nationally, and subsequently their consultants, to be informed about these projects, hugely increasing potential project recruitment.

We have very positive data from the projects we have completed so far, including an audit of IVIG use in ITP which accrued 975 patients in 39 centres nationally.

The benefits for those who registrars or consultants who contribute is that audit proformas and registration information for audit departments are prepared for them, their data is analysed for them and that they can achieve ‘citable collaborator’ status if they have given sufficient contribution on any papers published from those audits.

Further information can be found on our website; www.haemstar.org or by contacting haemstarnetwork@gmail.com. This can be useful for consultants in hospitals with no registrar presence so they can receive our monthly Newsletter which explains our current projects. 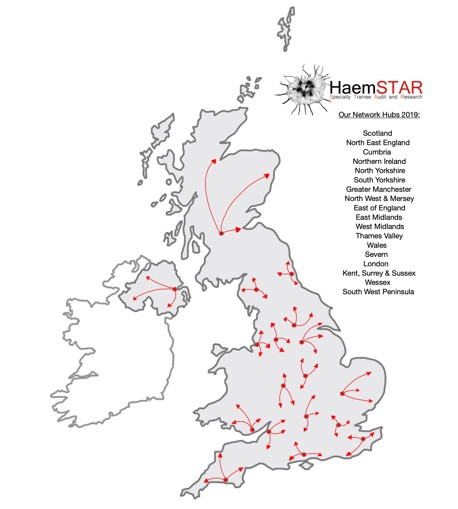 The department of haematology at King’s College Hospital and King’s College London are conducting a survey to understand the current prescribing practice of low molecular weight heparin for the acute treatment of antenatal venous thromboembolism. We would be grateful if you could spare 3 minutes to share your experience and practice.

Link to the survey: https://kings.onlinesurveys.ac.uk/once-versus-twice-daily-low-molecular-weight-heparin-for-t

Please direct any questions or comments regarding the questionnaire to Jignesh Patel (jig.patel@kcl.ac.uk)