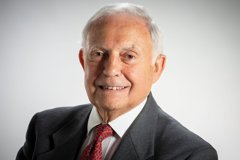 This major award recognises significant contributions to haematology in research, patient care and education. It is only the second time that the American Society's highest honour has been awarded to a British haematologist, Sir David Weatherall having received the award in 2013. It is named after the prolific inventor and engineer, Wallace Coulter, best known for developing the Coulter Principle which made it possible to count and size blood cells, and reflects his innovation, leadership and entrepreneurial spirit.

Professor Hoffbrand, Emeritus Professor of Haematology at University College, London, has led a distinguished career including authoring and editing many books including Hoffbrand’s Essential Haematology, Haematology at a Glance, Postgraduate Haematology and Color Atlas of Clinical Hematology. His early research at Hammersmith Hospital concerned megaloblastic anaemia. From 1974, at the Royal Free Hospital his research with colleagues was into biochemical, immunological and molecular aspects of the leukaemias and lymphomas including developing molecular tests for minimal residual disease. He also notably led clinical research pioneering the introduction of iron chelating drugs into clinical practice. These iron chelating drugs have transformed the quality of life and life expectancy of patients with refractory anaemias who become iron overloaded from blood transfusions, especially those with thalassaemia major. This groundbreaking work led to Professor Hoffbrand being awarded the Sultan Bin Khalifa International Thalassemia Grand International Award earlier this year.

The award will be formally presented during the 60th ASH Annual Meeting in San Diego in December this year from ASH President Alexis Thompson, who said:

“Dr. Hoffbrand’s text books have had a profound influence on thousands of undergraduate and postgraduate students worldwide, and through his teachings he encouraged many of us to become haematologists,” said Dr. Thompson. “He exemplifies a lifetime of achievement in haematology, and I am looking forward to honouring his contributions in front of thousands of my peers this December.”

“I am extremely honoured to receive the Wallace H. Coulter Award for Lifetime Achievement in Haematology, and I am humbled when I see the list of the distinguished previous award winners. I am particularly delighted to receive an award named after Wallace Coulter, since it was the ability to count blood cells that first attracted me to haematology as a scientific discipline.”

Speaking to BSH, where he served as President from 1989-1990, he elaborated on the impact of the award on British haematology:

"The Award is a boost for British haematology and especially the many adult and paediatric haematologists working in the UK and other countries worldwide who trained and performed research at the Royal Free Hospital. Since the first edition of Postgraduate Haematology was published in 1972, I have hopefully conveyed to readers of my textbooks my firm belief that haematology is the most exciting clinical and research discipline within the broad field of medicine."

If you have submitted an abstract for ASH 2018 in San Diego, why not apply for one of our ASH Travel Scholarships? Apply here.