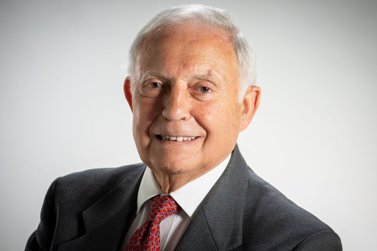 Professor Victor Hoffbrand received the BSH Lifetime Achievement Award for his outstanding contribution to the field of haematology. He was presented the award from BSH President Professor Cheng-Hock Toh at our recent Annual Scientific Meeting in Glasgow.

Professor Hoffbrand, Emeritus Professor of Haematology at University College, London, has led a distinguished career including authoring and editing many books including Hoffbrand’s Essential Haematology, Haematology at a Glance, Postgraduate Haematology and Color Atlas of Clinical Hematology. His early research at Hammersmith Hospital concerned megaloblastic anaemia. From 1974, at the Royal Free Hospital his research with colleagues was into biochemical, immunological and molecular aspects of the leukaemias and lymphomas including developing molecular tests for minimal residual disease.

He also notably led clinical research pioneering the introduction of iron chelating drugs into clinical practice. These iron chelating drugs have transformed the quality of life and life expectancy of patients with refractory anaemias who become iron overloaded from blood transfusions, especially those with thalassaemia major. This groundbreaking work led to Professor Hoffbrand being awarded the Sultan Bin Khalifa International Thalassemia Grand International Award in 2018.

Professor Hoffbrand was also rewarded for his contributions to haematology by ASH, where he received their lifetime achievement award in 2018 for his work.

"Professor Hoffbrand’s lifelong work has significantly shaped how haematologists practice in the UK and worldwide. The diverse impact extends from his many popular textbooks in haematology to shifting the practice of Haematology to be patient-facing and ward-based. This might be hard to believe now but we have a lot to thank Professor Hoffbrand for his grit and vision in enabling UK Haematologists to be equally respected as physicians and pathologists."